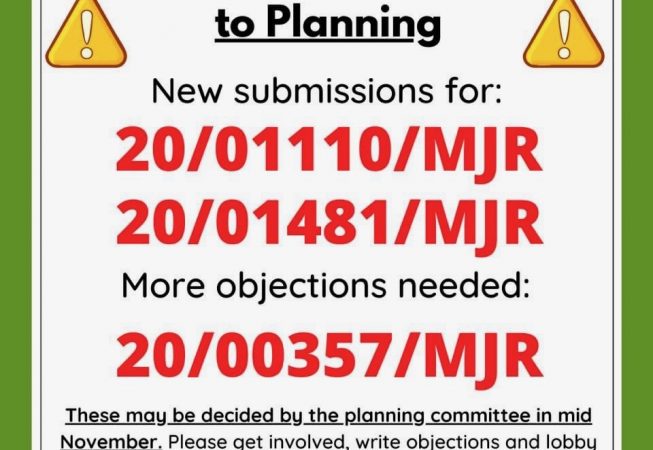 We have heard of new documents added to planning applications below, and strongly suspect these will be heard by the planning committee in mid November.

This process has been incredibly difficult and draining for us and the local community. But we are asking you to use all the resignation, frustration and anger to fuel your objections over the next couple of weeks.

🐝🐞 Get in touch and let us know what you have read and identified as changing between these submissions and the old ones; let us know any technical issues you have found, especially relating to biodiversity and cultural heritage; let us know if you see anything which could harm the local community such as fences being removed or use of Lady Corey field; and anything completely unsuitable or impossible which is just taken out of fantasy land as a means of justifying this over-priced development.

We must be outraged about this disproportionate spend, which has likely influenced the barrage of technical documents we see today, and will only increase as the project continues. This is an unaccountable and unjustifiable waste of public money at the expense of the community and the environment.

✅Use the energy to drive you forward!

Here are some guides provided by Paul Charles as to what and how to object:-

I have previously objected to 20/01481/MJR and 20/01110/MJR and further strongly object again to these further changes.

As a principle both these planning applications (and others) are continually having documents added immediately AFTER the Neighbour Consultation Expiry Date has expired. e.g. for 20/01481/MJR the developer has added to 22 documents on 20th October and for 20/01110/MJR 18 documents were added on 20th October. This means that the general public (with no experience of planning applications) have only 2 weeks to research through 40 documents to identify changes and object.

This can in no way be fair, no doubt we will get another bulk of changes after the latest expiry date.

I have previously objected to planning application 20/01481/MJR and further strongly object again to these further changes with following addition:

“Direct TCAR” “this calculation has identified a greater loss of habitat”

Tree survey shows out of 208 trees surveyed that 151 are in Category A (High) or Category B (Moderate ) quality – i.e. almost 3/4 of the trees will be destroyed.

The surveys undertaken on site and reported within the documents listed in Section 3.1 above, identified that there would be adverse impacts to the green infrastructure resources that currently exist on site.”

States development will have “Adverse” impact

Glamorgan Canal/Long Wood SSSI – Disturbance and damage or degradation resulting from potential pollution (air, noise and light principally) during the construction phase and impacts on the SSSI from the potential increase in visitor pressure.

Glamorgan Canal Local Nature Reserve (LNR) – Loss and fragmentation of approximately 0.5ha of woodland and grassland habitat within the LNR.

Forest Farm Country Park – Indirect disturbance and damage or degradation resulting from potential pollution (air and noise) during the construction phase and a potential increase in visitor pressure.

Coryton Heronry Wood SINC – Disturbance and damage or degradation resulting from potential pollution (air and noise) during the construction phase and the potential increase in visitor pressure.

Semi-natural broad-leaved woodland – LBAP habitat – Loss of significant areas of broad-leaved woodland within the LNR.
Continuous Scrub – notable habitat Loss of scrub habitat.
Dormice – Loss of dormouse habitat and foraging across the site, fragmentation of habitat. Potential for disturbance from increase in visitor pressure.
Birds – Loss of breeding bird habitat across the site and displacement of preferential nesting areas as a result of construction activities.
Bats – Loss of foraging and commuting habitat and fragmentation of habitat.
Reptiles – Loss of approximately 40% of the site for reptiles.
Species of principal importance – Loss of foraging habitat across the site for these species and disturbance from increased human activities.
Landscape – Change in site from being urban fringe/semi-rural in character to urban.
Arboriculture -Loss of broad-leaved woodland within the LNR.”

The above is the developers predicted damage to the environment – how can anybody let this happen?

Which report is correct if any – it is difficult to believe anything is correct in these published documents.

I have previously objected to planning application 20/01110/MJR and further strongly object again to these further changes with following addition:

“TCAR Central area (Area B) – The TPO trees effected by the Scheme were made by CCC in 1995 under reference ‘TPO 225’ and refers to sycamore and willow trees, referenced in the Order as; T161, T162, T162, T164, T165, T166 G23, G24, G25 and W02. However, the area encompassing the TPOs was reportedly cleared for earlier construction works, but no evidence has been able to be obtained to confirm the exact removal date and reason for removal with anecdotal evidence suggesting the area was used as a spoil area “

– TPO trees already removed by developers – Who has done this?

“Direct TCAR” “this calculation has identified a greater loss of habitat”

“Approach to safety of any SuDs features for the general public;    – Not addressed

A plan showing area for adoption by the Council, any statutory undertaker and areas to be maintained by a private management company;      Not addressed

● Proposed finished levels; As above.

● Hard surfacing materials; and As above.

● Existing and proposed services and drainage above and below ground level. As above.”

Lots of thing “NOT ADDRESSED”

“Improvements to the Local Nature Reserve

The Vision for the LNR is for proposed enhancements and managements to align with the purpose of the Friends of Forest Farm Country Park, as detailed in their constitution. Of relevance is to enhance Forest Farm County Park as a place of freedom, recreation and enjoyment for the long-term benefit of all sections of the community; to increase and protect the biodiversity of the park; to make the Park safe and more accessible to all parts of the community and to promote the use of Forest Farm Country Park for educational purposes for the benefit of the wider community.

A collaborative and positive relationship between the Velindre NHS Trust and relevant stakeholders to agree a package of works for the LNR site.

By the start of the main site construction.

Poor or degenerating relationship with no or little progress towards agreeing a package of enhancement works on the LNR site.

Surely planning cannot go ahead – Forest Farm have not agreed to this?

“If there is adequate surplus land within the development site a natural surface water pond suitable for reptiles could be included in the design. It should ideally be an area of approximately 500-1000m2 , but smaller ponds of approximately 100m2 can also be useful for Great Crested Newts with variable depths up to 1m to discourage fish and variable bank gradients. The pond should be surrounded with native planting and the whole area fenced with stile access for maintenance. “

They want to create a water feature ???

THIS WILL NEVER HAPPEN! THEY WILL HAVE DESTROYED EVERYTHING BY THEN AND NO FUNDS WILL REMAIN!

“Hard surfacing associated with the new buildings should be kept to a minimum to reflect the character of the site. Full consideration to sustainable drainage systems (SuDS) throughout the site should be given and as much permeable paving as possible should be used around the new buildings and in the car park.”

Rain water is going to run off the concrete and flood

4.2 Trees for Removal Due to the construction of the proposed bridges within Site 4 some sections of G22 to G25 will require removal. It is estimated that approximately 143 young to semi-mature trees in total will be removed from these four groups which includes a 10m swathe either side of the proposed bridges to facilitate construction. Also, the sparse population of young saplings in each area will be removed. This woodland is a Local Nature Reserve and as such dialogue with CC should be opened

.A further (approximately) 43 trees will be removed from groups W4, G14, G15 and G16 (mixed native and ornamental trees of categories A (W4) and C (G14-16) will require removal to facilitate construction of the revised road layout in Asda and associated drainage infrastructure.

To facilitate the construction of the main buildings and the car park, a large section of Group G13 will need to be cleared. It should be noted that the majority of group G13 is open ground and scrub with only occasional self-set trees. It should however be noted that this area has important habitat value, and is a designated SINC, therefore any proposed clearance must be assessed and approved by CC.

How many trees in total to be removed?

“Accesses that will need to be closed for all or part of the works include: ·

Access to the base of the disused railway corridor over the length required for construction vehicle access to construct the two new bridges. ·

Access to the meadow immediately south of the existing eastern masonry bridge (alternative access to be provided from the public path, south of the bridge).”

The areas for clearance can be summarised by habitat type as follows: ·

“In the short-term, in the absence of mitigation, the overall impact on the dormouse population as a result of the proposed clearance works is considered to be a negative impact significant at a local level”

Development will wipe out current dormouse population unless measures taken

Objections for planning application 20/01110/MJR and 20/01481/MJR will be closing on the 3rd of Nov(Tuesday). Below is a diagram of how the developer proposes to access the meadow via Whichurch hospital grounds.The video try’s to explain the reality of the situation and concerns for the listed chapel and also to those accessing City Hospice. (apologies for the quality of the video!) This is only about one new document that the developers added..